After hearing from over a dozen businesses, a few economists, several CU alum, and Greek political leadership, the student group is generally bullish on Greece. Interestingly, most people are willing to invest despite the fact that they are of the opinion that Greece has not yet hit rock bottom.

So what convinced the buyers?

First, Greece has improved its fiscal situation dramatically, having reduced its budget deficit from 10.5 percent to 1.5 percent of GDP between 2009 and 2012 and projecting a budget surplus of 0.4 percent in 2013. Second, we learned of a number of initiatives that should help boost economic output, including the privatization of Greek airports, the potential redirection of funds from pension programs to social safety net programs that can promote risk taking, and the direct infusion of euro funds into jobs training and education for the country’s desperately underserved youth population. Third, we heard from firms who were committed to a Greek recovery, despite their own diversified and global positions. Folli Follie, for example, has decided to use its global brand to promote the Greek brand. Similarly, Fage used its profitable and global position to reiterate its commitment to its Greek family of employees, stating that as long as they were able to, they would “never fire workers or reduce salaries”.

Greece is clearly in a precarious situation where the path to its recovery is entirely dependent on private investment, and at almost every meeting, Charlotte Ng ’14 grilled the leadership on how they could ever attract investors without clarity around the country’s future in the euro zone. In fact, I should clarify that of the 73 percent who said they would invest in Greece, over half of those respondents conditioned the investment on clarity of this issue. Also, despite its dramatic fiscal improvements, the country still has the enormous tasks of implementing structural reforms including further privatization, liberalization of closed industries, and tax enforcement. Cynics about whether or not Greece had the political will to accomplish these tasks included Kathimerini’s chief editor Alexis Papahelas, our very own Professor Charles Calomiris, and our Athens tour guide and historian, Niko (I’m sorry I don’t recall your last name!). Lastly, with unemployment at an appalling 27 percent and nearly 60 percent among the country’s youth, many simply wonder how much longer the people will tolerate these conditions.

A lot is riding on 2013. The country faces an end of May deadline to recapitalize its banks without an all-out nationalization of the industry, a critical factor in attracting private investment. The country is also eagerly awaiting the September German elections with the expectation that rhetoric around continued EU support will soften in Greece’s favor. While I personally share the same concerns of the naysayers, I am still generally bullish on Greece, mostly because I believe that the EU will not allow a euro failure.

Greece will go from a country of “red tape to red carpet”, or so we’ve heard more than a few times this trip. For most of our trip, there has been a sense of optimism from leaders in both the policy space and the private sector. But then again, what’s the alternative to success? There isn’t one that we can stomach.

Today we met with the Finance Minister, Giannis Stournaras, who was more than gracious with his time, despite the precarious situation in Cyprus. When I asked him about the implications to Greece and the rest of the Euro Zone in the event that Cyprus fails to pass an alternative plan, he said frankly that there must and will be a “Plan B”. Risk of contagion would certainly shake the markets, and the Minister stopped short of saying that the ECB would need to explicitly back Greece and the other southern European states if Cyprus is not rescued.

It is understandable that the Minister was interrupted by the Prime Minister himself a few times throughout our meeting, and so to make up for it, Prime Minister Antonis Samaras invited us to visit with him. It was awesome.

The Prime Minister spent 45 minutes with us in a fairly intimate setting, speaking candidly and without cameras. He spoke optimistically about the future of Greece, using the very phrase we had heard throughout the week, “from red tape to red carpet”. His demeanor was cool and collected, his tone “meant business”, to put it as one of my colleagues did, and his vision was clear. I was personally struck by his words when he said that the primary weapon for leaders across all sectors of society is “hope”. We left that meeting inspired by this exemplary leader.

I mentioned in my previous blog post that there is much uncertainty about the success of Greek’s strategy to sustainability. One thing is certain – these two leaders give the country the best chance of a Greek revival.

On the eve of Ash Monday the group partook in carnival festivities in a small, family-owned restaurant in an otherwise quiet neighborhood of Nafplio. The owners opened just for us and were excessively gracious hosts. We feasted on lamb, pork, lagana (holiday bread), and more than several liters of wine. After dinner they brought out festive hats, wigs, and lots of streamers. They played for us traditional Greek music and gave us lessons in Greek dance. They did not sit idly in the wings, but they dined and danced among us. For €15 per person, we were part of a Greek family tradition. None of us will forget this awesome experience, but it came, perhaps, as a result of the economic circumstances. 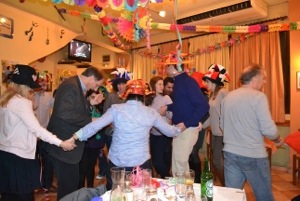 Similarly, yesterday I negotiated down €150 worth of merchandise to €100 all by agreeing to pay cash instead of credit to the owner of a lovely komboloi shop. Why would she agree to such a steep discount? The obvious answer – the one where I’m the yuppie American tourist who was ripped off even at €100 – is not likely the correct one (in this case only). No, the store owner was content receiving the €100 because this was still a profitable transaction for her, and my “discount” was essentially foregoing the value-added tax. The owner would likely under report, if report at all, the transaction to the tax authorities. I’ll add that after receiving incredible service from the store owner, she looked into my eyes, took my hand, and thanked me for visiting her home country and her store.

Tax evasion is one, though in my opinion the most significant, of many reasons that Greece continues to experience negative growth, persistent unemployment, and capital flight. The depression here is worse than the U.S. Great Depression of the 1930s by some measures. GDP has accumulated losses of 20 percent, unemployment is at 27 percent with the rate for youth at a staggering 55 percent, and investments are at crippling lows. This is what a depression looks like through the lens of an economist. But what about through the eyes of Grecians such as the store owners described above?

The excellent service and “crisis prices” are fundamental to struggling small businesses. There is also, of course, a darker side to this depression. Homelessness is pervasive, vendors are aggressive, and graffiti undermines the beauty of the city. I’ve not seen a protest thus far, but we’ve all seen pockets of unrest in the news. What’s more disturbing is the growing presence of a right-wing faction in Greek politics that is overtly racist and proud to be associated with a Nazi style.

After a few days of meeting local leaders, the strategy for long-term growth seems clear and more or less the consensus: Greece must privatize and reform to establish credibility in the global markets, which will in turn attract private investment. What is unclear is whether or not the people of Greece will have the patience to stomach the long-term nature of these reforms and whether or not the current government can retain control amidst rising social unrest.

I’m here a day ahead of most of my travel companions, but that hasn’t kept me from taking in City Center. The neighborhood is charming and residential, the streets lined with leafless tree stumps that I cannot for the life of me identify, cafes are sprinkled throughout, and the Hilton is among only a few towering hotels overlooking the Acropolis.

Eric Deichmann ’14 and I headed to a cozy neighborhood trattoria to sample the local flavors. Topping off my fabulously cliche Greek salad was a generous portion of feta cheese. Now, I live in Astoria and have tried dozens of feta cheeses, but none were ever as soft and creamy as this one. It quite literally melted in my mouth. As we finished off our house red, the waiter brought over a shot of mastic, a Greek liqueur native to the island of Chios, and compliments of the house. He then, observing the decadence through my expression, came over and said, “This is all we have. Feta cheese, olive oil, and sun.”

Oh if that were only true, I’d have a gluttonous nine days ahead of me. Instead, tomorrow begins the exploration of the land that is the birthplace of modern civilization, one with a history of rich prosperity but that is now rocked by fiscal calamity that threatens social stability. How have firms held up? How does the new Finance Minister, Yiannis Stournaras, plan to get the country’s debt under control with persistently high unemployment and tax evasion? And what is the sentiment among the people? These are all questions we will answer over the course of the next several days. All the while, of course, indulging in the feta cheese, olive oil, and sun.

We are less than one week from visiting the ancient marvels of Greece, but the mood is solemn on campus. This week we mourn the loss of DeShaun Maria Harris, class of 2014. I regret never really getting to know her, but ironically, she is preparing me for my role as a Chazen blogger. You see, I opened an email from Chazen with a list of to-dos, and on that list was a suggestion that I review former trip blogs to get a sense of what had been done in the past. I was led to a post from DeShaun dated February 11th, 2013, and she was attempting to capture her Chazen India experience in a closing summary.

This loss has been hard on everyone at the school, including me, despite never really knowing her. For me it has been a reminder that life and death are random events, something that we as high strivers tend to forget. As I read through blogs, tweets, and posts from DeShaun, her passion, enthusiasm, and thirst for knowledge and experience are clearly communicated.

The loss of DeShaun has also brought to awareness that there are still so many people to meet on campus, and so many bonds to strengthen. At Sunday’s memorial services, I shared hugs and tears with my classmates, a real testament to the deep community cultivated here at CBS.

DeShaun led a beautiful life full of adventure, generosity, and vision. She was not an aspiring maven; she had achieved it. She was an experiential connoisseur. I take these lessons with me into this Chazen trip keeping in mind that life is short and unpredictable. I will push the boundaries of this experience knowing that I may not be here tomorrow. And I will make 18 lifelong friends with my travel companions, hoping that we can enrich one another’s lives through deeper connections than just this blog. 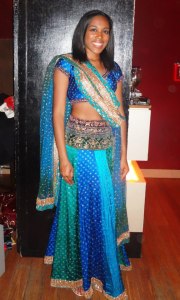