The key takeaways from our experience in South Korea can be broken down into three buckets: globalization, economy and culture.

During our meeting at the Ministry of Unification, it was interesting to learn about the preparation South Korea has taken in the event that North Korea and South Korea unite. From a cultural, educational and economic standpoint, integrating North Koreans in the South Korean economy is no easy feat and there are a number of scenarios South Korea is prepared to address. In addition, we learned about the Kaesong Industrial Complex, an industrial park inside North Korea where South Korean companies could work with North Korean employees and improve relations. However, the rocky relationship between the two countries caused South Korea to suspend operations at Kaesong Industrial Complex, hindering the unification process. Our visit to the demilitarized zone reinforced the view that many challenges remain for there to be peace between the two nations.

One of the buzz words throughout the week was “chaebol,” a term used for South Korean business conglomerates that helped stimulate the Korean economy after the Korean War. Chaebols, such as Samsung and Lotte Group, are family-controlled and exert an incredible amount of power both in the economic and political arenas of South Korea. While the government has actively sponsored the chaebols who have been responsible for much of Korea’s economic success over the last 65+ years, there has been much debate over the sheer size of chaebols and the consequences when one fails. It reminded me of the “too big to fail” institutions in the USA. Recently, the chaebols have been facing increasing pressure to increase transparency and break up their empires to let smaller businesses compete. It was fascinating to meet with Chazen South Korea sponsor and Lotte Group CEO Shin Dong-Bin who gave us an insider outlook into how a chaebol is managed on a daily basis.

I felt the group was pleasantly surprise with a passion South Koreans showed throughout the trip. The majority of company visits started with a relatively lengthy presentation on the history of the company and how the company’s current standpoint can be traced back to its founders. Our local guides loved discussing South Korean culture and our own South Korean CBS students were extremely enthusiastic about any questions we posed to them. On Jeju Province, our tour guide told us about her family and its history being in the “Haenyeo” (“female divers”) trade, which played a huge role in the Jeju economy. Our experience tasting various South Korean dishes, including “sea worms” which were still alive as we ate them, definitely made for an immersive experience!

Over the course of the trip, we learned about South Korea in three strands: country, company and people. On Friday and Saturday, we had the opportunity to experience the many wonders of Jeju Island, one of the nine provinces of South Korea based south of the mainland. The Jeju economy has recently seen a massive tourist boom from foreigners (particularly Chinese) as the government has granted them various benefits to travel there.

After taking a one hour flight from Gimpo Airport, we hopped on a bus where our tour guide provided us with sushi to eat on the road. Our first visit was to the O’Sulloc Tea Museum where we took a class on South Korean tea making and shopped for all things tea related. We had dinner at a restaurant that was five stories tall and felt like it could house hundreds of people in one sitting. The food was quite interesting, with one of our side dishes being a “sea worm” that was still alive and moving at the table…

The next day was pure cultural activities. We visited the Manjanggul Cave lava tube and the Seongsan Sunrise Peak which was rose from a volcanic eruption over 100,000 years ago. Lunch was awesome – a choice of abalone bibimbap or vegetarian bibimbap along with a slew of side dishes for the table. After lunch, we traveled back to the airport to take a flight back to Seoul. Upon arrival, we shuttled back to the hotel for a debrief with Professor Wallen to discuss our experience in South Korea and the key takeaways from the companies visited. The night activity was Club Octagon, one of Asia’s hottest clubs. It was truly a cultural experience to see the South Korean nightlife and how the locals let loose on a Saturday night! Everyone is flying out tomorrow and the last night has been bittersweet, but I have no doubt the bonds formed on this trip will remain solid when we are all back in New York.

It’s hard to believe how much we covered on Day 5 of the Chazen Korea 2016 tour. After waking up bright and early, we hopped on a bus to the DMZ (the Korean Demilitarized Zone which divides North and South Korea), where we learned about the history of North and South Korea, had the opportunity to “cross” the border and took pictures on North Korean soil.

After returning to Seoul,  we took a tour of Changdoekgung Palace & Secret Garden (a royal villa that is a UNESCO World Heritage site), and were able to walk outdoors in the beautiful spring weather.

We then pivoted to a completely different activity in a company visit to CJ E&M, a media company that owns 18 cable channels, satellite, IPTV, internet and mobile broadcasts including games and music. The highlight of the visit was attending a live broadcast of a TV show highlighting the top K-Pop bands. the audience consisted of a crowd of young teenagers screaming to get their favorite icon’s attention and the CBS Chazen crew. Pretty interesting combination…

Dinner was held at Season’s Table, a buffet style restaurant that offered a ton of traditional Korean dishes. It was fun to try the many different types of kimchi, condiments, and local vegetables.

The night activity (still to come) is karaoke, so everyone is getting some beauty rest before heading out to sing and dance. Hopefully the K-Pop show inspired a few members of the group to take the lead and put on a performance later this evening!

Day two of the Chazen South Korea 2016 trip started off with a bang. After walking across the street from our hotel, we received a super warm welcome in the form of a massive banner (see picture below) from the CEO of Lotte Group and sponsor of the CBS Chazen Tour, Shin Dong-Bin, along with an army of staff. Lotte Group is one of the largest companies in Korea, employing over 60,000 people across business units ranging from retail to financial services. As one of the Korean chaebols (South Korean form of business conglomerate), the Lotte Group plays a crucial role developing the Korean economic landscape. Needless to say, everyone was excited to learn more about the Lotte Group.

The group was instantly “wowed” by a presentation on the newly constructed Lotte World Tower, one of the tallest buildings in the world. Following a motivational video highlighting all of the amenities and services offered through the Lotte World Tower (with phrases such as “Korea’s pride soars even higher”), we all put on construction hats and took an elevator to the top of the tower for arguably the best view of Seoul. A few interesting facts about the tower:

We also listened to a presentation by Shin Dong-Bin who shared an overview of the many businesses Lotte is engaged in. It was unbelievable to see how diverse the Lotte Group is in terms of industry. Mr. Shin explained that despite the diversification of the brand, it’s market shares in respective industries was so great that he was not concerned about being spread too thin.

We were then introduced to the Lotte World Mall (a huge luxury shopping destination), the Lotte Concert Hall (the first in Korea to introduce vineyard-style seating), Lotte World Acquarium (where we hung out with beluga whales, seals, and other types offish), and the Lotte Cinema (home to the largest theater in the region and the largest movie screen in the world).

Part two of the visit was to the Lotte Homeshopping studio and the Lotte Confectionary factory. The former was awesome: we had the opportunity to experience a live broadcasting of a TV channel that broadcasts live 20 hours/day highlighting and selling items such as clothing and apartments for sale. The latter visit was even more awesome: we got to see how gum, ice cream, and chocolates were processed while also trying samples of everything. We could not have asked for more special treatment and the visit with the Lotte Group was a huge success overall.

The combination of jet lag and unlimited amounts of candy led to a group snoozing session on the bus ride afterward, but we quickly gained some energy back to regroup for our visit with the Ministry of Unification and the CBS alumni dinner reception. More details to come! 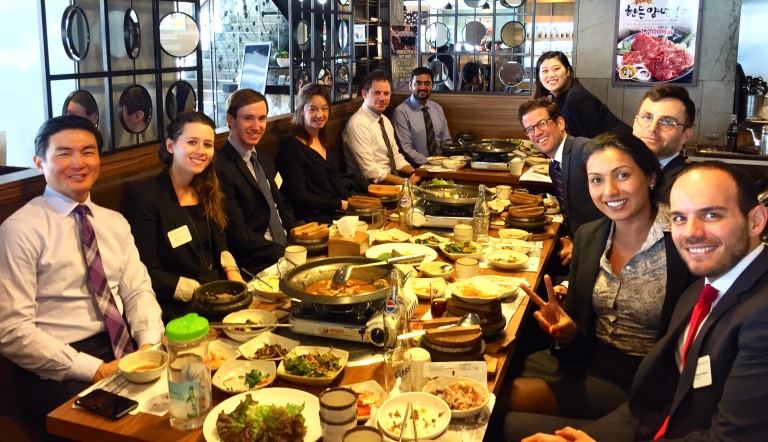 Today marked the official launch of the 2016 Chazen Korea Study Tour, with a pre-departure meeting taking place in Uris Hall. For weeks, participants have been anxious to get all the juicy details on logistics, accommodation, company site visits, and (arguably most importantly) the food situation in South Korea.

Everyone was pumped up as they walked into the classroom to receive their Chazen track jackets and were welcomed with a diverse assortment of South Korean snacks. I must admit that I am usually accustomed to Strokos pizza, so it was a welcome surprise to see this rice punch: 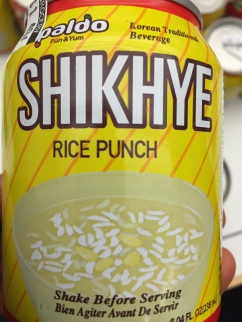 We covered all the basics such as things to pack, important phone numbers, the agenda, and transportation details. Among the companies we are scheduled to meet with: Kia, Samsung, and The LOTTE Group. There was particularly a LOT of excitement when we heard that we would be visiting the Korean Demilitarized Zone (DMZ), the buffer zone between North and South Korea. Students sat in groups according to the specific company they were assigned to; each group will deliver a short presentation on the respective companies we visit in order to enhance the Q&A discussion. Professor Wallen also encouraged students to reach out regarding preparing company specific questions.

The organizers have done an unbelievable job ensuring people are completely comfortable and all individual requests are addressed. From dietary restrictions to international visas, it’s challenging to accommodate every request and everyone has really appreciated all the hard work they have done thus far. There is no doubt students will be wearing their Chazen South Korea track jackets proudly in the coming weeks leading up to the trip!