Chazen Japan began in Kyoto, the beautiful city of more than 1600 temples and surrounded on all sides by mountains. Our journey began with a traditional Kaiseki meal – a Japanese dinner of several courses, each consisting of many tiny plates. During the course of the meal we sampled sashimi and tempura, while individual burners cooked meat, rice, and fish at each of our seats. As we ate, we were entertained by a Maiko, a Geisha in training, who performed traditional dances and challenged any takers to Japanese board games.

Monday was our first full day of the trip, which we began at the Taizo-in Zen Buddhist Temple. There, a priest led us through a guided 20-minute meditation, an abbreviated version of the typical hour-long meditation that more seasoned meditators partake in daily. After meditating, we learned about Zen philosophy and toured the temple, a complex of small buildings connected by pathways overlooking hundred year old rock and sand gardens. Before leaving the temple, we enjoyed Zen cuisine: a  vegetarian lunch made by the temple’s own chef that was served in a bento box. 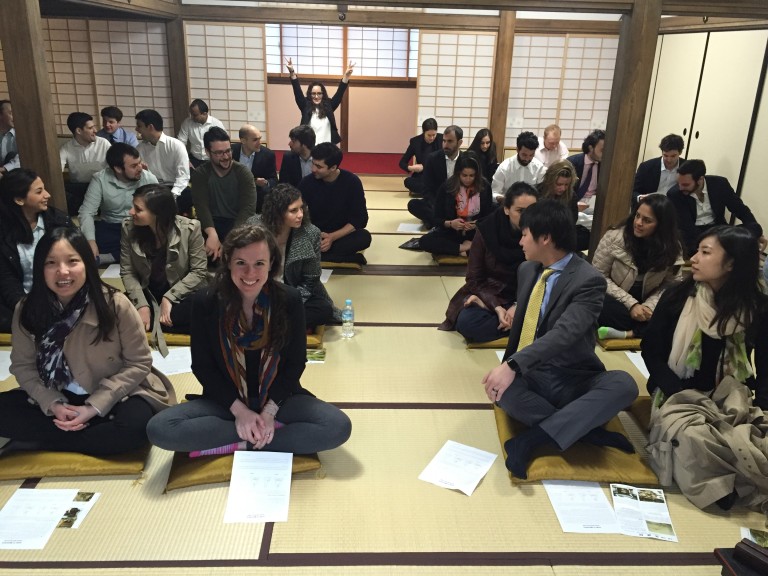 In the afternoon we visited our first company, Screen. Beyond being our company visit, our trip to Screen was all the more special because it’s the employer of one of our trip organizers, Joji.  Screen is a 150-year-old company that began as the first printing shop in Kyoto and is now a leading manufacturer of semi-conductor production equipment, graphic arts equipment, and flat panel displays. We met with Screen’s Managing Director, Mr. Katsotushi Oki, who shared the company’s history and current strategy with us, and answered questions about the company’s new business, including its venture into organ resuscitation. From the Screen office, we enjoyed a panoramic view of Kyoto as we sampled different Japanese snacks, many flavored with green tea and sakura (cherry blossom).

Before leaving Kyoto, we enjoyed several of the cities tourist destinations, including the Golden temple Kinkaku-ji, Nishiki Market, and the Shintu shrine Fushiki Inari Taisha. We’re now on the bus to Toyota, our next stop, where we’ll take a factory tour and visit the heart of lean operations.