Blogging was not one of the experiences I expected to have at CBS, but alas, there is a first time for everything.  I’ve always liked writing; prior to enrolling at school I served as a speechwriter for former Clinton Administration officials and the CEO of Alcoa.  Now it is time to try it out on the web.

Spring break is rapidly approaching, and the conversation in Uris Hall has inevitably turned to travel destinations.  There are a healthy mix of options, from a staycation in New York to renting a villa on the coast of Nicaragua, but there were a few CBS students who were lucky enough to be chosen for Chazen trips.  I applied for and won a spot on the Japan trip, which, needless to say, is rather exciting.

When I think of Japan, I think about Sumo, Sushi and Shinkansen (bullet train).  While experiencing all of those things are still high on my priority list for this trip, our agenda is much more expansive.  The organizers, four Japanese students who have graciously agreed to shepherd us around their country, have come up with a tremendous itinerary.  Besides visiting a number of awesome companies– including Toyota and Uniqlo– we are going to experience an onsen (spa) and take a cruise around Tokyo Bay.

Besides arranging the trip, including every logistical detail for those of us arriving early, our organizers have also hosted dinners in NYC to facilitate friendships amongst the Chazen Japan participants and give us a taste (pun intended) of what Japan has to offer.  The meal at Sun-Chan restaurant near Columbia stands out in my mind. It was a feast.  Upon arriving, there were plates of delectable sashimi and edamame placed on the table.  While we all initially thought this was the meal, we were in for a decadent surprise.  Endless rounds of Japanese delicacies began to stream out of the kitchen, from chicken meatballs to rice with eel.  Two hours later, the entire group had eaten far too much.  But, we did learn something critical for our trip.  To say cheers in Japanese, you simply clink glasses and shout: KANPAI!

My flight to Osaka leaves in a little over 10 days and I couldn’t be more excited.  I know that the other trip participants feel the same way.

Signing off for now, you’ll hear more from me once I’ve arrived in Japan and seen a Sumo match. 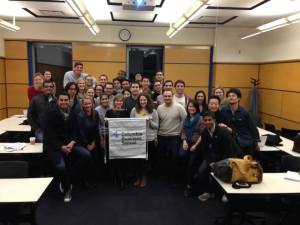