Thursday was the day I was most excited for prior to starting the visit, and it did not disappoint. First, we went to the Chamber of Commerce where we met with the Secretary of State for the economy. He gave us an insightful macroeconomic picture of Spain that we do not see in the media, sharing some interesting facts about successful Spanish companies that were doing world-class work both overseas and abroad. Additionally, he shed some more light on the current financial crisis and what steps he has taken to improve the situation. It turns out many of the supposedly Italian olive oil companies in America are actually Spanish and are simply branded as Italian in order to satisfy the American consumer’s belief that Italian olive oil is the best. Also, it is a Spanish company that will be building a high speed train between the holy cities of Mecca and Medina, Saudi Arabia.

From there, we went to meet with the CFO of Real Madrid, the world’s most profitable soccer team. He explained the business model of Real Madrid, which was fascinating. After the talk and a question and answer session, the CFO had organized a private tour of the stadium, including the field and locker rooms, as well as the official museum and lunch in one of the VIP restaurants overlooking the field. I felt like a kid in a candy store getting to see the entire stadium and walk out onto the field the same way that the players do. The extent to which they care for the grass on the field 24/7 is an amazing process to witness firsthand and the opportunity to see that was great.

Again, we finished off our day with an amazing 8 course meal at a top restaurant in Madrid. I could get used to living like this!

The Man, The Myth, The Legend, Cristiano Ronaldo’s Shoes

Group photo on the actual field! 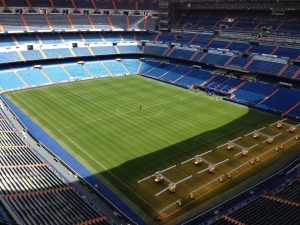 The view from high up 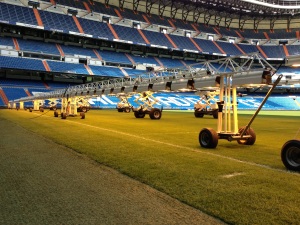 These lights keep the grass that doesn’t get sunlight fresh 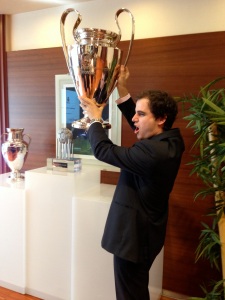 Joaquin was clearly excited to be there